Chair of the year jury awarded Chair of the Board of Wärtsilä, Mikael Lilius, the Best Chair in Finland in 2017. 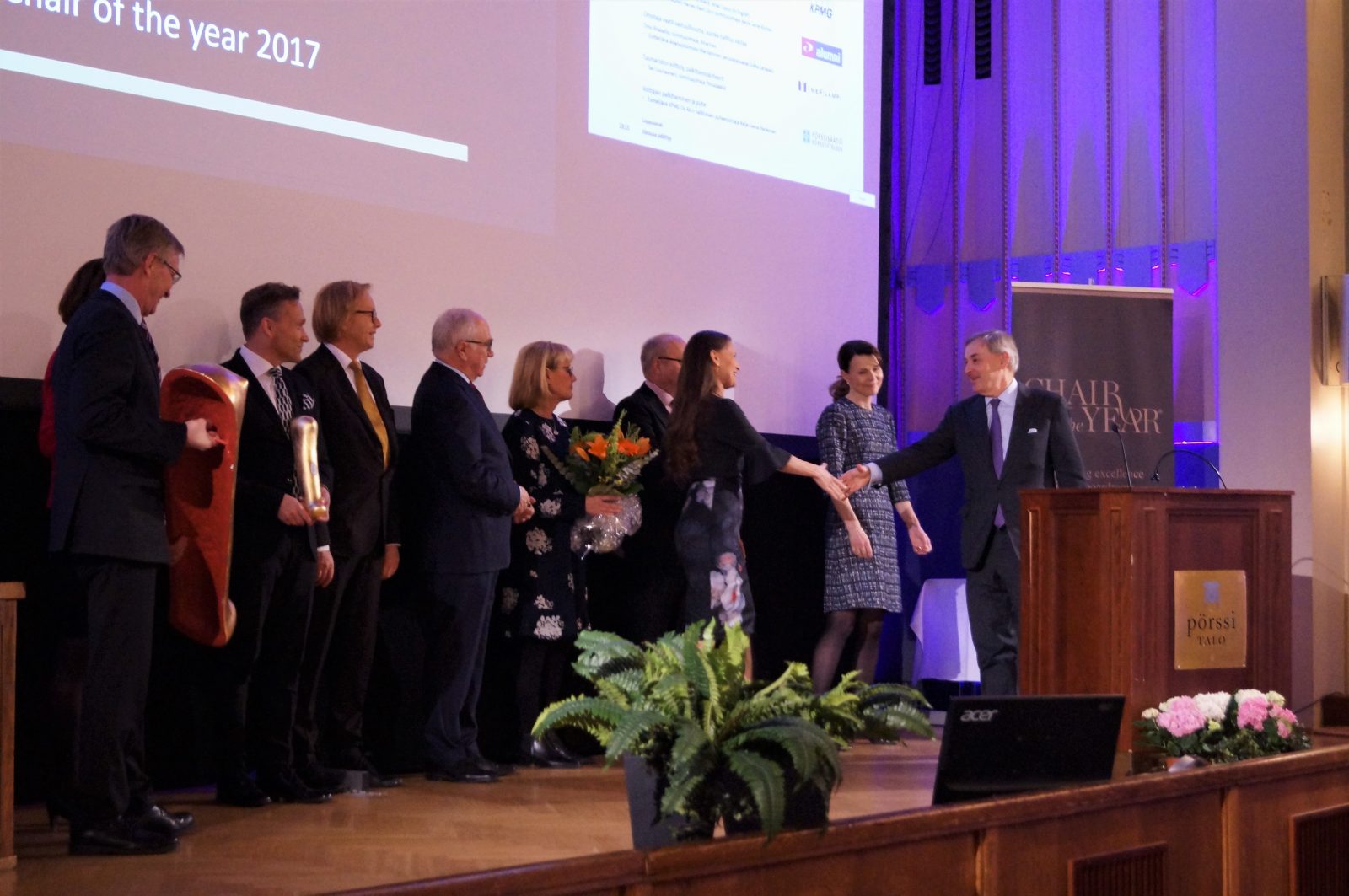 According to the jury Mikael Lilius has a successful history in boards of Nordic companies. In addition to his work in business, he has also been an important background influencer in the academic world.

”Mikael Lilius has faced challenging situations as a chair. With his leadership boards have recruited CEOs and made decisions about mergers and acquisitions. The results are convincing”, describes the head of the jury Sari Lounasmeri from the Finnish Foundation for Share Promotion.

Wärtsilä is a Finnish corporation which manufactures and services power sources and other equipment in the marine and energy markets. In 2016, Wärtsilä’s net sales totalled EUR 4,8 billion with approximately 18 000 employees. The company has operations in more than 70 countries around the world. Wärtsilä is listed on Nasdaq Helsinki and its market cap on early January was EUR 10,6 billion.

The winner of Chair of the year is required to have lead the same board of a listed company for over three years. Other selection criteria measure the financial success of the company, development of total shareholder return as well as the role and impact of the chair.

Mikael Lilius has lead the board of Wärtsilä since 2011. The total shareholder return of Wärtsilä has grown significantly during his term. In addition, Lilius is also the chair of the boards of Metso and Ahlström Capital.

The Chair decides the agenda

The most important corporate decisions are made on the board. The board oversees the management and decides on the strategy. The board also selects and terminates the CEOs agreement.  The responsibility of board members has grown over the last few years and at the same time the workload has increased.

”The chair decides what gets put on the agenda for the board and what is left out”, explains the chair of the year 2017 Mikael Lilius. “The chair has always more information than the rest of the board members. International boards may find it difficult to find time together on short notice. When it comes to selecting a new CEO, for example, the chair must take an active role.”

Board position is not a formal reward, it is real work. Lilius emphasizes that board members carry significant responsibility and face an increasing workload. Regulation has brought more mandatory issues to the boardroom. Lilius believes that Shareholders rights’ directive that will bring “say on pay” to the annual general meetings will also influence the organizing of the board committees. It will be less common to see the chair of the board to function also as the chair of the compensation committee, he believes.

Chair of the board of Atlas Copco, Hans Stråberg, also spoke in the event at the Helsinki Stock Exchange Building. Stråberg emphasizes the role of the board in increasing shareholder value – in a fast changing environment the importance of the strategic understanding of the board becomes ever more important.

Chair of the year is a Nordic award given annually to the best chair of the board of a listed company in each country. The Nordic winner is then later selected from among these national winners and awarded later in the spring.

The members of the jury are: Sari Lounasmeri (chair), CEO of Finnish Foundation for Share Promotion; the previous winner Jorma Eloranta, Chair of the board of Neste; Jannica Fagerholm, CEO of Signe and Ane Gyllenberg Foundation; Eero Heliövaara, former head of state ownership department; Timo Ritakallio, CEO of Ilmarinen.

The partners are: Alumni Harvey Nash, KPMG and Merilampi Attorneys.